Grabowski is one of the most active and appreciated Polish performance artists of his generation. In the 20 years of his artistic activity he realized over a two hundred of actions – of strong visual impact, charged with physical energy and an intrinsic sense of humour as well as thoughtful criticism. Entertaining, horrifying, challenging and never boring, the physical action images created by Grabowski reveal the absurd, chaotic and ironic layers of society and human behaviour. Arti graduated from the Academy of Fine Arts in Krakow, where he obtained a Diploma (MA 2003, PhD 2010) with distinction of the Performance art. His diplomas were the first realized in this field in Poland. At present he is an assistant professor at the Department of Intermedia, working together with Prof. Artur Tajber in Poland’s first Studio of Performance art.

Son of a forester and a nurse. Moulded from two opposite traits. He was a boxer, a sculptor, actor, painter, played drums, founded the first local councils and youth parliaments in Poland and Ukraine, co-organized the first concerts of Wielka Orkiestra Świątecznej Pomocy Foundation, was president of the Academic Sports Club at the Academy of Fine Arts in Cracow, this year he has ceased to be a patriot, a Catholic and an artist. In addition, he has been discouraged by people, so he has ceased to be a man, he is simply a performative animal immunized by the vaccine of absurd, distance, and enthusiasm. Sometimes he is unpredictable, but more often he is known as the heart of a dove. His work is a shaky idiom, it exudes a dose of emotions: it entertains, scares, surprises but is never boring. Sometimes he shows an uncompromising respect to himself and the audience - as proven by a collection of documented injuries acquired while performing around the world. He admits that from the beginning he was sentenced to performance, father being a forester, a miner, extreme rebel, known as artist "painter of gesture." High school of art bore the name of Tadeusz Kantor. He started his studies at the Krakow Academy of Fine Arts - in the Mecca of living arts in Poland. Diploma defended at the Faculty of Sculpture in the performance art which was unprecedented in Poland. Currently, he is Ph.D. assistant professor teaching performance art, together with Prof. Artur Tajber in first Performance Art Studio at his alma mater. He lives in the Performers Street... Subordinated all his life to the art of performance. 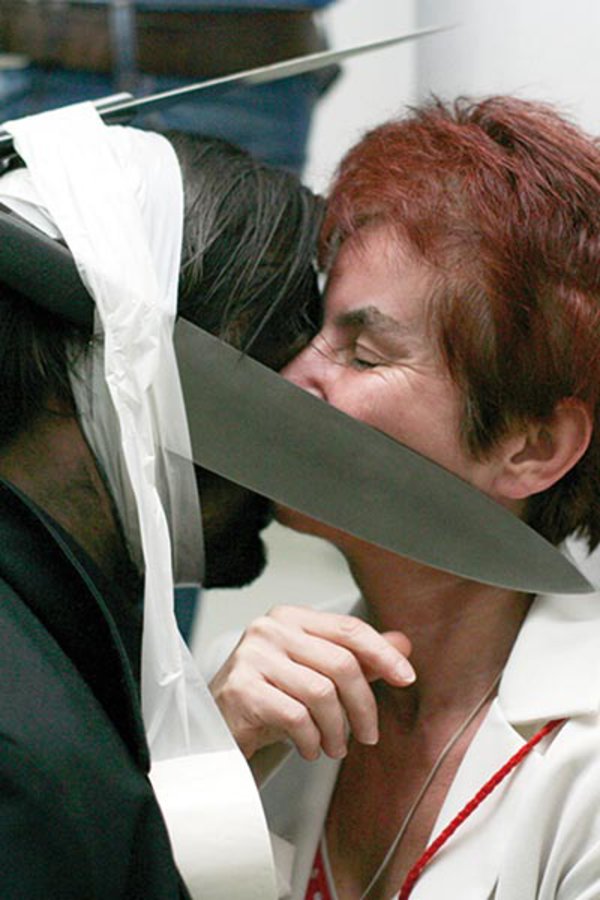