Lives and works in Madrid.

Analía Beltrán i Janés is a graduate in fine arts from the Complutense University of Madrid. She works with video and photography and, since 2001 in the field of perforamance art, on which her main activity is focused.

Owing to her training in the visual arts, her work in performance arises out of a need to eliminate the artistic object in order to create a more direct exchange between the public and herself, frequently involving direct audience participation. She tries to make the work aesthetically simple, by using everyday objects infused with an important symbolic charge.

She wants the spectator to clearly perceive the message that she seeks to transmit; or rather, more than that, she hopes that her work provokes feelings that are within everybody’s grasp, whether or not they are familiar with the artistic references, that the work is open to an additional, more complex, level of interpretation. This second level is where the influences of her performances are revealed; in general, in poetry, songs and traditional stories, as well as issues that concern her in her own social circumstances, particularly those related to questions of gender. Her performances focus upon notions of her identity as a woman, as spanish and also as human being in society. They are also concerned with violence and the play of power in our society.

She has participated in festivals such as Acción!08MAD in Madrid, the X Havana Biennal (Cuba), Infr'Action 09 in Séte (France), Ebent 2010 (Barcelona), E`pipiderme, 2010 (Lisboa), Infr'action Venezia 2011, Perfomedia 2011 and 2012 in Bergamo and Venice, Italy, Dimanche Rouge (Dic, 2011) Paris, and Guangzhou Live in China, amongst others. She lives in Madrid where, in a variety of different spaces, most of her work in performance art is conducted: Artenaccion, Espacio Espora, Festival “Reformance”, Espacio Menosuno, etc..

LIVE ACTION 8 presents her work for the first time in Sweden. 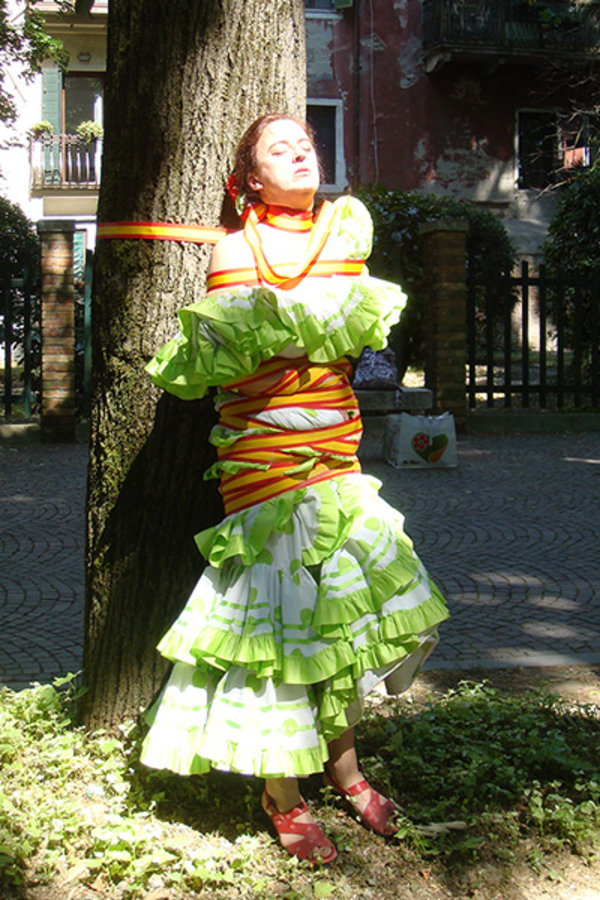